The Konantz-Cheney Funeral Home was founded by George A. Konantz, who came to the Fort Scott area in 1872. He worked for the Goodlander Lumber Company, and was later made manager of the Uniontown and Bronson Lumberyards. As Manager of the lumberyards, Mr. Konantz was frequently requested to build a wooden coffin or casket. Being a deeply religious and highly respected man, it was natural for the bereaved family to ask George Konantz to say a prayer at the graveside. Thus his future as a funeral director became clear. He entered the first group of embalmers licensed in Kansas and received license number 39 in April of 1900.George Konantz moved to Fort Scott proper from Uniontown in 1903, and opened the Konantz Funeral Home and a livery service. In 1907, he built a funeral home at 15 West Wall Street, the present location. He founded the funeral home offering the best in service and facilities at a reasonable cost to everyone. The second generation, A.B. Konantz, known throughout this area as Bruder, followed in his father’s footsteps, receiving his license in April 1917. After his marriage to Hazel Bicknell and service in the U.S. Marine Corps during World War I, Bruder joined the firm. Under his direction the funeral home was completely remodeled and brought up to date in 1935. Bruder and his cousin W.E. Earl; Konantz ran the funeral home together from 1942 until 1950. In 1949, the third generation joined the Konantz firm as Bruder’s daughter Hazel Marie and her husband Jack Stapleton joined with Bruder. Upon completion of his degree at Kansas University and embalming school in Kansas City, Jack received his license in December of 1951.Following the death of Bruder in January, 1974, Jack and Hazel Marie purchased the remaining interest in the funeral home. In May of 1974, the fourth generation of the Konantz family joined the firm. Susan Stapleton Foster and her husband, Melvin Foster, Jr., both graduates of Pittsburg State University, joined the firm. Following his professional training, Melvin received his license in January, 1976.In 1950, after the termination of his partnership with Bruder Konantz, Earl Konantz opened Earl’s Memorial Home at 750 S. National Avenue. Albert ‘Ab’ Cheney also came from a background of family funeral service. Until their deaths, his uncle and father owned and operated Cheney’s Chapel of Fort Scott. Until his father’s death in 1950, Ab worked for them at Cheney’s Chapel. Ab left Cheney’s Chapel in 1953, and joined Earl Konantz in 1959. Ab Cheney purchased Earl’s Memorial Home in 1969 with Earl continuing to serve until his death in July 1979. Ab’s oldest son, A.R. Cheney, worked with his father until his death in 1975 at the age of 24. Michael Cheney, the second oldest, received his licenses in funeral service in 1976, and joined his father. Following their father’s death in March of 1981, Annie , Ab’s youngest daughter came to work with Mike at Earl’s. Mike purchased the funeral home in 1988 from his mother. In January, 1989 Michael Cheney and Melvin Foster, Jr., who was then president of Konantz, Inc., formed a corporation and purchased both Earl’s Memorial Home and Konantz Funeral Home, forming the Konantz-Cheney Funeral Home, located at 15 West Wall Street in Fort Scott, Kansas. Our current staff consists of Mike Cheney and Melvin Foster, Funeral Directors, Dara Jackson and Gary McGee, Administrative Assistants, and a weekend/evening Receptionist. If you’re in Fort Scott, Devon, Bourbon County, Redfield, or Fulton, KS, please contact us today for funeral services. 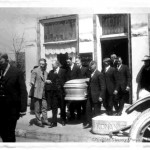