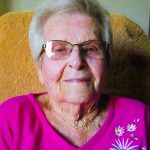 Anna Marie Rose, 100, of Uniontown, Kansas, passed away, Monday evening, January 3, 2022, at the Medicalodge Nursing Home in Fort Scott.  She was born December 23, 1921, in Muskogee, Oklahoma, the daughter of Rupert Marcus and Clara Alma (Price) Warren.

At the age of five, she and her family moved from Muskogee to McCune, Kansas where she attended Idell Grade School and McCune High School, graduating in 1941. After graduating she attended the Coffeyville School of Cosmetology. She had her own business for a short time in McCune.

She married Floyd Rose on February 2, 1944, and lived in the Girard, Kansas area for a short time before moving to the Uniontown area. She was a farmer’s wife for many years. In 1968 she went to work at the IMP Boat Plant where she was an upholsterer for ten years. After retiring from there she started sewing for other people and did alterations for the Boot Jack in Fort Scott. She altered wedding dresses and made bride’s maid dresses for many people in Fort Scott and the surrounding area. In her later years, she made quilts and hand quilted them. She was very proud of the many quilts she made.

Anna was a member of the First Missionary Baptist Church of Uniontown. For many years she was an active member of the ABW and held office in the District Organization. She was a member of the Uniontown Red Hat Society for many years. They ventured out to many places of interest and enjoyed restaurants in the surrounding area for their monthly excursions. She always enjoyed the luncheons and visits with friends.

Anna is survived by her son, Merle Rose, and wife Betty of Uniontown, daughter Linda Inkelaar of Derby, Kansas, daughter Carol Cameron, and husband Mike of Muskegon, Michigan; 11 grandchildren, 18 great-grandchildren, and 15 great-great-grandchildren. She was preceded in death by her parents, her husband Floyd, son Gary, an infant son, an infant daughter, two grandsons, Jeff and Greg Shriver, brothers, Bill and George Warren, and son-in-law, Leo Inkelaar.

Rev. Marty DeWitt will conduct funeral services at 10:30 a.m. Tuesday, January 11, 2022, at the First Missionary Baptist Church in Uniontown with burial following in the Uniontown Cemetery, under the direction of the Konantz-Cheney Funeral Home. Visitation will be from 6:00-7:00 p.m. Monday, January 10, 2022, at the Funeral Home. Memorial contributions are suggested to Alpha Christian Children’s home and may be left in the care of the Konantz-Cheney Funeral Home, 15 W. Wall Street, P.O. Box 309, Fort Scott, Kansas, 66701. Condolences may be submitted to the online guestbook at konantz-cheney.com.