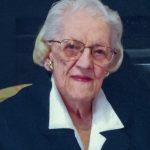 Betty graduated from Fort Scott High School with the Class of 1949, and received a B.S. degree in 1953 and an M.S. degree in 1956 from Pittsburg State University. She taught high school mathematics in Bonner Springs, Kansas, returning to Fort Scott in 1966 where she was a high school counselor until her retirement in 1993.

From childhood she was a member of the Presbyterian Church in which she served in a variety of ways, including that of Elder. In 1999 she became a member of Trinity Lutheran Church where she also served.

Betty especially enjoyed her church work as well as her volunteer work at the hospital and in the Presbyterian Village office.  Her special interests included music and animals.

Pastor Michael Apfel will conduct funeral services at 10:30 a.m. Saturday, August 13, 2022, at the Trinity Lutheran Church in Fort Scott, with burial following in the Prescott Cemetery under the direction of the Konantz-Cheney Funeral Home. Friends may come to call at the funeral home any time until 7:00 p.m. Wednesday through Friday. Memorial contributions may be made to the Good Samaritan Fund at Presbyterian Village and may be left in the care of the Konantz-Cheney Funeral Home, 15 W. Wall Street, P.O. Box 309, Fort Scott, Kansas, 66701. Condolences may be submitted to the online guestbook at konantz-cheney.com.