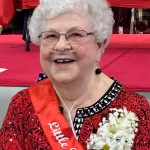 Betty Jo Messer, 86, of Fulton, Kansas, passed away Wednesday evening, May 26, 2021, at Via Christi Hospital in Pittsburg, Kansas. She was a current resident of A Country Place Senior Living in Fort Scott. She was born September 10, 1934, in Linn County, Kansas, the daughter of Chester W. and Mary Elizabeth (Hines) Shafer. She married Merlin Boyd Messer on September 14, 1952, in Fulton, Kansas. He preceded her in death March 8, 2014.

Betty graduated from Fulton High School in the class of 1952. She played on the basketball team and was a cheerleader.  She loved music, playing in the school band and developing her singing voice.  She was offered a college vocal music scholarship but was unable to accept it.  She relaxed from being a farmer’s wife and mother of 5 children by playing the piano and singing every afternoon. She introduced her children to musicals and continued that love by attending her grandchildren’s concerts and programs.

She was an accomplished seamstress making clothing for the family.  She sewed at night to stay awake to make sure that Merlin would wake up to drive the fuel truck to the next destination.

She tried to go to every basketball, baseball, softball, soccer and volleyball game and track and cross country meets that the grandchildren were in.

Rev. Chuck Russell will conduct funeral services at 2:00 p.m. Monday, May 31, 2021, at the First United Methodist Church in Fort Scott with burial following at the Barnesville Cemetery under the direction of the Konantz-Cheney Funeral Home. The visitation will begin at 1:00 p.m. prior to services on Monday. Memorial contributions may be made to the Fulton United Methodist Church, or the Ellis Foundation Scholarship Fund and may be left in the care of the Konantz-Cheney Funeral Home, 15 W. Wall Street, P.O. Box 309, Fort Scott, Kansas, 66701. Condolences may be submitted to the online guestbook at konantz-cheney.com.