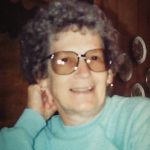 Bobbe Ellen Ward, 91, passed away on January 29 at Guest Home Estates in Fort Scott where she had resided for the past few years. Bobbe was born on July 4, 1930, in Uniontown, Kansas to Alton and Ellen (Roberts) Clark. She graduated from Uniontown High School. She married Daniel S. Ward on July 24, 1948, in Redfield, Kansas, and he preceded her in death May 9, 2013.

During her husband’s time in the military, she lived in Florida and California, eventually returning to Fort Scott. Bobbe worked as a teacher’s aide and a secretary at Eugene Ware Elementary School for many years.

Bobbe was a member of the First United Methodist Church where over the years she had been involved in Methodist Women, Sunday school, volunteer activities, and Cub Scout den mother. She enjoyed square dancing, sewing, quilting, knitting, crocheting, her coffee group with long-time friends and preparing meals after church on Sunday for her growing family. She loved attending sport and school activities. Bobbe had the gift of laughter and those that had the pleasure of knowing her never saw her in a bad mood. At Guest Home Estates, the staff called her “their cheerleader.”

Following cremation, private family graveside services will be held at the Fort Scott National Cemetery under the direction of the Konantz-Cheney Funeral Home. Memorial contributions may be made to the First United Methodist Church or Meals on Wheels and may be left in the care of the Konantz-Cheney Funeral Home, 15 W. Wall Street, P.O. Box 309, Fort Scott, KS 66701. Condolences may be submitted to the online guestbook at konantz-cheney.com.