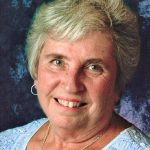 Bonnie Sue Taylor, 80, of Bronson, Kansas, passed away Thursday afternoon September 17, 2020, at Mercy Hospital in Springfield, Missouri. She was born November 15, 1939, in Coffeyville, Kansas, the daughter of Raymond Samuel and Florence Rhoda (Wyckoff) Mason. She married Ronald “Ronnie” Fred Taylor on May 31, 1959, in Fort Scott, and he survives of the home.

Bonnie was the office supervisor at Newman Young Clinic from 1957 until she retired in 1996. Bonnie attended Xenia Baptist Church. Her family was the light of her life.

In addition to her husband Ronnie, Bonnie is survived by son Raymond Taylor, of Bronson; a sister, Peggy Davis of Fort Scott; three grandchildren; four great-grandchildren. She was preceded in death by her parents, a brother Samuel Mason, and a son, Brad Taylor, April 3, 2001.

Rev. Randy Smith will conduct graveside services at 10:00 a.m. Monday, September 21, 2020, at the Bronson Cemetery under the direction of the Konantz-Cheney Funeral Home. Memorial contributions may be made to the American Diabetes Association and may be left in the care of the Konantz-Cheney Funeral Home, 15 W. Wall St., P.O. Box 309, Fort Scott, KS 66701. Condolences may be submitted to the online guestbook at konantz-cheney.com