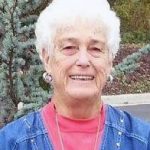 Carlene was a Sales Secretary serving Sears’, JC Penny’s, and Montgomery Ward’s totaling 50 years, and lived in Kansas, Florida and Hawaii during the decade of the 1950’s, in California during the 1960’s, back to Kansas during the 1970’s and Texas during the 1980’s and 1990’s.  She returned to Fort Scott for a few years in the 2010’s but recently moved back to Texas to be near some of her children and grandchildren.  Carlene was a member of the Grace Baptist Tabernacle while she lived in Fort Scott.

She is survived by two daughters, Jeanann Sumner and husband, Greg of Elkhart, Texas and Carrie Baker and husband, Mike of Trinity, Texas, a son, Gregory Rinehart and wife Violet of Rusk, Texas, a brother, Gary Kruger and wife Carla of Montgomery, Texas. She was also blessed with an abundance of loving grandchildren and great grandchildren.  In addition to her husband, Edward, she was preceded in death by her parents, Carl and Mary (Shinn) Kruger and a son, Eddie Rinehart.