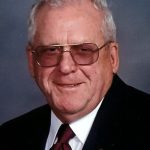 Charlie was the Vocational Ag instructor at Louisburg High School from 1950-1955 and started the first Louisburg FFA Chapter. He worked for the Kansas Extension Service and was the Cowley County Extension Agent from 1955 until 1988.

He served and held office in a number of organizations. He was a board member for the National County Agents Association, was Director of the NCAA North Central Region covering 12 states, Chairman of the NCAA National Scholarship Committee. He served as President, Vice President, and Secretary for the Kansas County Agents Association and was also Board Director for the Kansas State University Ag Alumni.

He was active in the First Christian Church of Winfield, Kansas, and was also an active member of First Presbyterian Church of Fort Scott, Kansas. He taught high school age Sunday school classes, and he taught Bible study classes in the Southeast Kansas Regional Correctional Center. He also volunteered at Mercy Hospital. He and Maxine received the Award of Merit from the Fort Scott City Commission.

Rev. Dr. Jared Witt will conduct graveside services at 1:00 p.m. Tuesday, September 22, 2020, at St. Mary’s Cemetery in Winfield, Kansas, under the direction of the Konantz-Cheney Funeral Home. Memorial contributions may be made to Heifer International and may be left in the care of the Konantz-Cheney Funeral Home, 15 W. Wall St., P.O. Box 309, Fort Scott, KS 66701. Condolences may be submitted to the online guestbook at konantz-cheney.com.