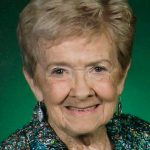 Clara May Pigg Schwartz, 100, of Fort Scott, Kansas, passed away on Wednesday, July 28, 2021. She was born January 21, 1921, in Arma, Kan., the daughter of Jesse T. and Flora Ruth (Vaughan) Pigg. She married Kenneth Fritz Schwartz on December 16, 1942, in Nevada, Mo. Kenneth passed on September 5, 2014, at 103 years of age. They were married 71 and a half years. Clara grew up in Bourbon County. She attended Gish School, Fort Scott High School (Class of 1938), Fort Scott Junior College, Washburn and Pittsburg State Universities.

Clara was employed by Southwestern Bell Telephone Company for 37 years, retiring in 1978. In 1971, she became the first woman appointed to a district (District Traffic Manager Operator Services in the Parsons District). In 1972, Clara was named Woman of the Year in Business by the Pittsburg Area Chamber of Commerce.  During her years of employment, she worked at offices in Fort Scott, Chanute, Pittsburg, Topeka, and Parsons.

As a member of the Presbyterian Church in Pittsburg and Fort Scott, Clara served on the Board of Deacons and was moderator of the women’s organizations.

For many years, she was active in the Altrusa Club, Telephone Pioneers of America, Business and Professional Clubs, Pierian Beta Clubs, Pauline’s Toy Workers, Azram Temple No. 81, Daughters of the Nile, Fort Scott Daughters of the Nile Club, Olive Chapter No. 13 Order of Eastern Star, White Shrine of Jerusalem, and Mercy Hospital Auxiliary, serving each group with distinction.

After retiring, the Schwartzes made their home at Lake Fort Scott where they enjoyed swimming, boating, and fishing. Much of their time was spent traveling, including trips to Australia, Japan, Europe, Alaska, Hawaii, Greece, Turkey, Israel, Egypt, Mexico, and Canada, as well as cruising all the Caribbean Islands.

Rev. Dr. Jared Witt will conduct funeral services at 11:30 a.m. Monday, August 2, 2021, at the first Presbyterian Church under the direction of the Konantz-Cheney Funeral Home. Burial will follow in the Fort Scott National Cemetery. Memorial contributions may be made to the Daughters of the Nile Endowment Fund or in memoriam at First Presbyterian Church and may be left in the care of the Konantz-Cheney Funeral Home, 15 W. Wall Street, P.O. Box 309, Fort Scott, Kansas, 66701. Condolences may be submitted to the online guestbook at konantz-cheney.com. The family requests that everyone wear masks and observe social distancing at the funeral.