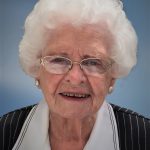 She married Oscar C. Maberry of Garland, Kansas on April 5, 1946. They would have celebrated their 58th anniversary six days after Oscar’s death on March 30, 2004.

Claudia’s first job was at the local ice cream parlor. She then opened and managed Elmer Pargen’s first restaurant before going to work as a seamstress for Key Work Clothes for several years.

Claudia’s most important and valued positions in life were that of devoted wife, mother, grandmother, aunt, and friend.  She was an active, member of the now-closed First Christian Church, Disciples of Christ, for 58 years.  She was, also, a member of the Builder’s Class, Anna Bender Guild, and served as a board member and deaconess and could be found frequently working in the kitchen preparing meals for various church events. Claudia was proud to be a charter member of Starlite FCE and continued her membership throughout her life.

Claudia moved to Madison, MS, in December, 2016, to live with her daughter and son-in-law.