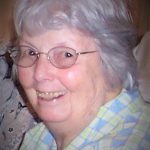 Daisy Louise Strader, 94, of Fort Scott, passed away Sunday afternoon, August 22, 2021, at her home. She was born February 19, 1927, in Uniontown, Kansas, the daughter of James Frederick and Bertha Dean (Ramsey) Pryor. She graduated from Uniontown High School. She married Richard Strader in Noel, Missouri in 1950, and he preceded her in death March 14, 2003. After early years as a housewife and mother, she worked at the local Sears Roebuck store as credit manager until the early 1980’s.

Throughout her life, she loved being outdoors. Like many farm children during the Depression years, she fished and hunted squirrels to help supplement family meals. Living along the river, she helped her dad set trotlines and check them daily. She also learned to trap for skins that she could trade in town for a little spending money.  She liked nothing better than to take the boat her dad made of native lumber and go up and down the Marmaton River by herself for a day’s outing.

Later when she married, she enjoyed traveling and camping with her family, first in a tent, then gradually working up to a 5th wheel RV. The wide-open vistas and less traveled roads of the western states were her favorite destinations. One highlight of her life was spending five months in Yellowstone National Park as a volunteer campground host with her husband and daughter. Later as her daughter’s career took her to various locales, she lived with her daughter in Texas, Arkansas, South Dakota, and New Mexico, returning to Kansas in 2005. She was always ready to see new territory, meet new people and acquire new skills.

She was a lifelong seamstress, making most of her and her daughter’s clothing for many years. She could look at a picture of a dress in a magazine or catalog and make a copy. She also knit, crocheted, spun wool, wove on a floor loom, quilted, wrote poetry, and painted. She loved flowers and gardening. In the early 1980s, she and her daughter operated the Post Sutler Store on North Main, a combination yarn shop and 19th-century reproduction wares shop. During the late 1970s and early 80s, she volunteered at Fort Scott National Historic Site, working in living history activities, curatorial and photo archives, and the visitor center.

Louise is survived by her daughter Jean Strader of Fort Scott, Kansas.  In addition to her husband Richard, she was also preceded in death by her parents, and a brother, Jack Pryor.