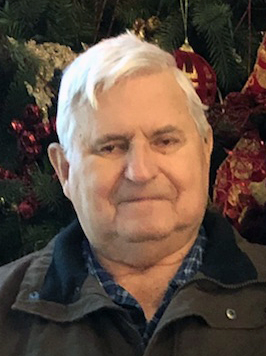 Dean Mitchell, 82, of Fort Scott, Kansas passed away Wednesday morning, December 13, 2017, at Mercy Hospital in Joplin, Missouri. He was born May 30, 1935, in Mulberry, Kansas, the son of Harry Allen Sr. and Elsie Angeline (Caldwell) Mitchell. He married Effie Belle Waring October 27, 1957, in Garland, Kansas, and she survives of the home.

Dean was a Tool & Die Maker at Peerless Products for thirty-eight years, as well as a Farmer/Stockman for his whole life until retiring in 2012. He was a member of the Devon Lodge #92, and a member of the Hiattville Lodge #216 which merged with the Devon Lodge in 2015. He was also a member of the Ideal Chapter #369 O.E.S. of Hiattville which merged with the Olive Chapter #13 O.E.S. about twenty years ago. He served several terms as Worshipful Master of Hiattville Lodge, as well as several terms as Worthy Patron of Ideal Chapter. Dean loved his grandchildren and great-grandchildren, and his whole family until his last day.

In addition to his wife Effie, Dean is also survived by his children, Karen Hines and Ken, of Nevada, Missouri, Evelyn McGinnis and Rod, of Waverly, Kansas, and Jerald Mitchell Jr. and JoLynne, of Fort Scott, Kansas; a brother, Ben Mitchell of Nevada, Missouri; nine grandchildren and one step-grandchild, and fourteen great-grandchildren. He was preceded in death by his parents, two brothers, Charles Mitchell, and Allen Mitchell, a sister, Arlene Hawkins, and a grandson, Trent Dean O’Dell.

Rev. Don Flanner and Rev. Dallas Peterson will conduct funeral services 10:30 a.m. Saturday, December 16, 2017, at the Konantz-Cheney Funeral Home. Burial will follow at the Hiattville Cemetery, with Masonic Rites conducted at the cemetery. The family will receive friends at the funeral home Friday evening December 15, 2017, from 6:00 p.m. until 7:00 p.m. Memorial contributions may be made to the Hiattville United Methodist Church and may be left in the care of the Konantz-Cheney Funeral Home, 15 W. Wall Street, PO Box 309, Fort Scott, KS 66701. Condolences may be submitted to the online guestbook at konantz-cheney.com.