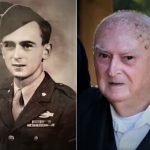 Dr. George Everett Hudiburg, 97, of Fort Scott, passed away Saturday, January 2, 2021, at the Girard Medical Center. He was born June 25, 1923, in Pittsburg, Kansas, the son of Leo Everett and Ruth Mary (Lee) Hudiburg. He married Joyce Colleen Conley August 17, 1949, in Independence, Kansas, and she preceded him in death September 4, 2004.

George served during WWII in Company A of the 318th Infantry and was honorably discharged in November of 1945 with a Purple Heart for wounds he received in battle in February of 1945. He was also awarded The French Legion of Honor which is the highest French distinction for fighting in France during WWII. George went on to teach for several at Parsons Middle School and High School. He then went on to achieve his doctoral degree in Educational Leadership at the University of Arkansas. George completed his career in education as a Professor and student teacher supervisor at Pittsburg State University.

Survivors include his children, Peggy Joyce Bebb of Kalispell, Montana, Leo Everett Hudiburg and wife Janene of Pittsburg, Kansas, and Kenneth Joe Hudiburg and wife Michelle of Fort Scott, Kansas; seven grandchildren; and four great-grandchildren. In addition to his wife Joyce, he was also preceded in death by his parents, and his son-in-law, Jim Bebb.

Rev. Virgil Peck will conduct graveside services Thursday, January 7, 2021, at the Fort Scott National Cemetery under the direction of the Konantz-Cheney Funeral Home with military honors provided by the US Army National Guard Honor Detail. The family suggests memorial contributions be made to PSU College of Education Dept. of Teaching and Leadership. Contributions may be left in the care of the Konantz-Cheney Funeral Home, 15 W. Wall Street, P.O. Box 309, Fort Scott, Kansas, 66701. Condolences may be submitted to the online guestbook at konantz-cheney.com.