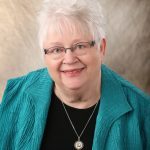 Liz’s smile said it all. She was not one to let the little inconveniences and the occasional setbacks of life alter her “can do; let’s do it” attitude. She truly achieved the fullness of life in her 78 years and died doing what she loved most… helping others. She was attending a Kansas P.E.O. meeting near Topeka, KS on November 8, 2019, to select grant recipients when the Lord called her home.  When she became the current President of the Kansas State Chapter of the P.E.O. Sisterhood, she chose as her theme “Build, Grow, Live”, represented by the shell of the Nautilus, as her theme for the year.

Liz spent most, but not all, of her career in nursing education at the community college level. After graduating from St. Louis University with her B.S.N. degree, she applied for and was awarded a federal grant which enabled her to continue her post-graduate education at Catholic University, earning her M.S.N. degree. While attending CU, she met her husband, Bill, and they celebrated their 50th wedding anniversary in June of this year. Liz was unique in her ability to balance work and family. Even though she was teaching full time, she never missed a school event or one of the many activities in which her daughters were engaged. She was “Horse Show Mom” when Kay was into horses and voted “Parent of the Year” for attending and supporting the Lehigh University crew team when Beth was rowing. She was an advocate for women’s education and a driving force in Sarah’s pursuit of a Master’s degree in Education and a career in teaching early childhood and elementary education. Liz loved vacationing at the beaches of the Outer Banks of North Carolina and the lakes of the Adirondack Mountains in New York. Liz never learned to swim but she loved the water! She and Bill met on a sailboat in Annapolis, MD and, for years, they enjoyed sailing the Chesapeake Bay with their young daughters, Kay, Beth, and Sarah. In addition to sailing on the Chesapeake, Liz became a great cook! She loved to entertain and thought nothing of creating a culinary masterpiece for a house full of friends!

Liz’s professional accomplishments were many. In addition to teaching, she served on a national committee of the American College of Obstetrics and Gynecology developing standards for Obstetrical Nursing. She was Director of Neonatal Intensive Care, Pediatric Care and Burn Trauma at the largest hospital in Des Moines, IA.  Liz also served for eight years as Nurse Manager for the Visiting Nurse Association of Washington, DC. In 2000, Bill and Liz retired to Fort Scott, KS where they had lived in the 1980’s, during which time Liz had served on the nursing faculty of Fort Scott Community College. Soon after returning, Liz was offered the opportunity to serve as Director of the College’s Nursing Program. She accepted the position on condition that she could pursue accreditation of the nursing program by the National League of Nursing. With the full support of the College, the program achieved full accreditation under her leadership. Liz retired from her position, but not from life, in 2007. She became more and more involved in the P.E.O. Sisterhood and served as President of Chapter FU before being selected to serve on the Kansas State Chapter Board in 2016, advancing to President in June of this year. Within the Fort Scott Community, Liz served on the Board and as President of the Historic Preservation Society of Bourbon County; Chair of the Homes for the Holidays Tour; member of the Bourbon County Arts Council; and, at the time of her death, was serving as a member of the Board of Trustees of Fort Scott Community College.

Arrangements are provided by Konantz-Cheney Funeral Home of Fort Scott with a public celebration of Liz’s life scheduled at Fort Scott Presbyterian Church, 306 South Crawford Street, on Saturday, November 16, at 11:00 A.M. The family will join for a private farewell service at Lake George, New York, next Summer. In lieu of flowers, Liz would be thankful for contributions made to P.E.O.’s own Cottey College, Nevada, MO.