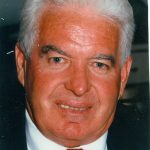 Eugene L. Farmer (91) was born in the family farmhouse near Devon, Kansas, on January 5, 1930. He passed peacefully May 19, 2021, at Presbyterian Village in Fort Scott.  He was the second child of Alfred and Rowena (McCrum) Farmer.

He, his older sister, Colleen, and younger brother, Don, all attended a one-room country school for the first eight years. Later he graduated from Ft. Scott High School. In high school, Gene excelled in both football and track. In January of 1949, he married Betty Jane Martin.  On their first anniversary in January of 1950, he proudly brought home his wife and first child, Cindy. Cindy was followed by Rod in 1951, Kathy in 1952 and Marty in 1957.

Always a hard worker, he gained plumbing and heating experience from working for his father-in-law, C.C Martin of Martin Plumbing and Heating.  Gene then began working in construction. Some of the buildings of which he helped build were the National Guard Armory, Mercy Hospital, and the KG&E company.  He worked morning and night often milking both his father’s and his own cows, as well as sometimes farming in the moonlight.

In 1956, Gene began a new occupation as fireman, brakeman, and conductor for the Frisco railroad working between Kansas City and Fort Scott.  At that point he was able to purchase his own farm just north of Bethel School and Church. He and his family moved to Overland Park in May of 1968.

In 1983 Gene married Ruth Milam Williams, a teacher and coach in the Olathe School District. After 35 years of service, Gene retired from the Burlington Northern Railroad in January 1992. Upon retirement, with his strong work ethic, Gene followed his first love and purchased a farm, built their dream home, and began farming outside of Ft. Scott.

Gene and Ruth joined the First Presbyterian Church in Ft. Scott where they were quite active. Gene served as a deacon and Ruth served on many committees. Gene moved his Shriners’ membership to Mirza Temple of Bourbon County.  He particularly enjoyed activities that benefited the crippled children.   Having season tickets for many years they attended KU basketball and football home games and enjoyed many vacations with the Flying Jayhawks Alumni Association.  Always a farmer, he loved to plant large gardens each spring and both enjoyed giving away much of the harvest to church, family, and friends.  He loved training bird dogs (mostly setters) and took pride in being one of the most passionate quail hunters in Bourbon County. In addition to a love for the outdoors, which included farming, hunting, and fishing, he also pitched fast pitch softball for the Devon Hay Bailers.

A tractor purchased by Gene’s dad, Alfred, was a 1955 Minneapolis Moline ZB. Gene had it restored and enjoyed driving it in Ft. Scott parades. He won several awards including driving the featured tractor that appeared on the collector button for the 2008 Pioneer Harvest Fiesta.   Gene’s grandson (Josh) later purchased the tractor which may be seen in future Turner Day parades. Both Gene and Ruth felt honored in receiving the 2009 Bankers Conservation Award for Bourbon County.

A Celebration of Life will be held at 2:00 p.m. Thursday, June 10, 2021, at the First Presbyterian Church of Fort Scott at 308 S. Crawford under the direction of the Konantz-Cheney Funeral Home. Visitation will be from 1-2 pm with the service beginning at 2 pm. Interment will follow at the Centerville Cemetery. The family requests that in lieu of flowers, memorial contributions be made either to the Shriners Hospitals for Children or First Presbyterian Church and may be left in the care of the Konantz-Cheney Funeral Home, 15 W. Wall Street, P.O. Box 309, Fort Scott, Kansas, 66701. Condolences may be submitted to the online guestbook at konantz-cheney.com.