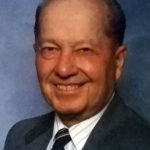 Floyd Gilbert Harper, 94, of Uniontown, Kansas, passed away Sunday morning, August 18, 2019, at the Medicalodge Nursing Home in Girard, Kansas.  He was born January 4, 1925, in Uniontown, Kansas, the son of Walter William and Iva Kough Harper.  He married Helen Louise Eshelbrenner, January 18, 1953, at the Eshelbrenner house on National Ave, in Fort Scott, Kansas.

As a young man, Floyd farmed and when times got tough he also worked in construction building mostly schools and libraries.  He farmed the remainder of his life retiring at the age of 88.  He loved his dogs.  He enjoyed watching the Kansas Jayhawks, the Kansas City Royals and the Kansas City Chiefs.  He was especially proud to say he and Helen were married for 66 years.

Graveside services will be held at 11:00 a.m., Wednesday, August 21, 2019, at the Uniontown Cemetery under the direction of the Konantz-Cheney Funeral Home.  The family will then have a Celebration of Life at the Uniontown Community Center.  The family suggests memorials to “Care To Share” and contributions may be sent to or left in the care of the Konantz-Cheney Funeral Home, 15 W. Wall St., P.O. Box 309, Fort Scott, Kansas 66701.  Condolences may be submitted to the online guest book at konantz-cheney.com.