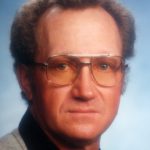 Rev. Paul Rooks will conduct graveside services 11:00 a.m. Thursday, August 30, 2018, at the West Liberty Cemetery under the direction of the Konantz-Cheney Funeral Home. The family will receive friends at the funeral home at 10:00 a.m. on Thursday and leave for the cemetery and 10:45 a.m. Condolences may be submitted to the online guestbook at konantz-cheney.com.