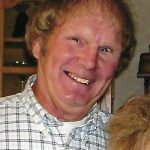 George Holt, 83, of Uniontown, Kansas passed away Wednesday evening, October 10, 2018 at Country Place Living in Fort Scott. He was born May 6, 1935, in Uniontown, Kansas, the son of Herbert and Beulah (Neth) Holt. He graduated from Uniontown High School in 1953 where he lettered in football and basketball. He married Esther Ann McKee on March 4, 1956, In Uniontown. To this union were born two sons, Brent and Brad. The boys grew up on the family farm north of Uniontown, where their parents worked the land and raised cattle for sixty-two years.

Survivors include his wife, Esther, of the home, a son, Dr. Brent Holt and his wife Cheryl, of Roanoke, Virginia; two grandsons, Logan Holt (Carolina), and Sam Holt, of Christiansburg, Virginia; three step-grandchildren, Trevor, Sean, and Cara, and one great-granddaughter, Fernanda Alison Holt-Salinas. Also surviving is his sister, Nadyne Walker, of Fort Scott, several nieces and nephews, including two special caregivers, Donna Sifers and Marci Williams. He was preceded in death by his parents, a sister, Marilyn Brown, and his beloved son, Brad, who died in 1989.

Private services are under the direction of the Konantz-Cheney Funeral Home, with burial in the Uniontown Cemetery. Memorial contributions are suggested to the Uniontown First Missionary Baptist Church Building Fund, and may be left in the care of the Konantz-Cheney Funeral Home, 15 W. Wall Street, PO Box 309, Fort Scott, KS 66701. Condolences may be submitted to the online guestbook at konantz-cheney.com.