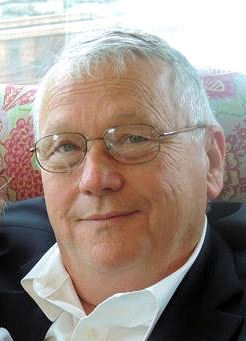 Dr. Kerr graduated from Rockhurst High School in Kansas City, Missouri in 1961, Regis College in Denver, Colorado in 1965, and the University of Kansas School of Medicine in 1969. He did his Internship at St. Luke’s Hospital in Kansas City, Missouri from 1969 until 1970. He did his Pathology Residency at Portsmouth Naval Hospital, Portsmouth, Virginia from 1970 until 1974, and then served as the Laboratory Director there until 1977. He and his family moved to Fort Scott in 1977 where he began his Pathology Practice at Mercy Hospital and later co-founded Midwest Pathology Consultants. He served as Chief of Staff for Mercy Hospital, and served as the Bourbon County Coroner for many years. He retired from medical practice in 1996. He was a member of the Mary Queen of Angels Catholic Church, and he served in the US Navy from 1970 to 1977.

Rev. Father Robert McElwee, Rev. Father Nicholas Blaha, and Rev. Father Robert Wachter will concelebrate the Funeral Mass 10:00 a.m. Saturday, November 14, 2015 at Mary Queen of Angels Catholic Church, with burial following at the St. Mary’s Cemetery under the direction of the Konantz-Cheney Funeral Home. The family will receive friends for a visitation beginning at 5:30 p.m. Friday evening, November 13, 2015 at the church, followed by the Rosary at 7:00 p.m. Memorial contributions may be made to the Mary Queen of Angels Catholic Church Youth Fund, or the Gregory the Great Academy, 621 N. Bromley Ave., Scranton, PA 18504. Contributions may be left in the care of the Konantz-Cheney Funeral Home, 15 W. Wall Street, P.O. Box 309, Fort Scott, KS 66701.