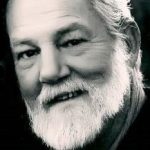 Private burial will take place at Clarksburg Cemetery, and a celebration of life will be announced and held at a later date.

Glen Richard “Rick” Singmaster, 74, of Arcadia, Kansas, passed away on April 13, 2020, at his home.  He was born March 19, 1946, in Fort Scott the son of Donald “Reece” and Luetta “June” Kitchen Singmaster.  Rick was a member of the Fort Scott High School graduating class of 1964. He married Phyllis Cullop in 1965 and from this union, a son was born.  They later divorced. In 1985, he married Carol Jenkerson, and they lived a full and happy life together.

Rick was self-employed for most of his life, turning his passion for astronomy into a successful business, Starmaster Telescopes.  In addition to astronomy, he had a great love for music, fast cars, motorcycles, and his grandchildren.

Private burial will take place at Clarksburg Cemetery, and a celebration of life will be announced and held at a later date.  The family suggests memorials to the Leukemia Foundation in memory of his brother, Donnie Singmaster. Donations may be sent to or left in the care of, the Konantz-Cheney Funeral Home, P.O. Box 309, 15 W. Wall Street, Fort Scott, KS   66701. Condolences may be submitted to the online guestbook at konantz-cheney.com.