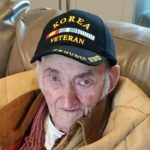 Harley Lloyd Moss was born May 19, 1927 in Prescott, Kansas to Roy Mark Moss and Elsa Landona Woods Moss and left this life for his heavenly home on April 9, 2018, at the age of 90 years, 10 months and 21 days in Fort Scott, Kansas.  He was married to Lucy Evelyn Cassidy on February 14, 1953 at the Federal Courthouse in St. Louis, Missouri.  She preceded him in death on February 13, 2014, and also by a brother, Charles Lee Moss, in 1948.  He is survived by a sister, Alice Stewart, of Camp Point, Illinois, one daughter, Carol Reasoner, of Redfield, Kansas, and three sons, Lonnie Moss and his wife, Kathy, of Oronogo, Missouri, Jerry Moss and his wife, Else of Fort Scott, Kansas, and Larry Moss (Jeannie) of Miami, Oklahoma.  Also surviving are eight  grandchildren and five great-grandchildren, Stephanie and Tim White and their sons, Titus, Quintin and Truman of Lubbock, Texas; Christine and Nathan White of Lexington, Kentucky; Daniel and Christina Moss and their son, Ethan, of Carthage, Missouri; Isaiah and Isabell Moss of Fort Scott, Kansas; Jennifer and Ashley Garlick of Florissant, Missouri, Heather Moss of Miami, Oklahoma, and Jerry Moody of Wichita, Kansas.

Harley lived in the Prescott and Pleasanton, Kansas area until he entered the Army in February, 1951.  He mustered out at Camp Carson, Colorado in November, 1952, after having served 10 months in Korea.  He was awarded the Korean Service Medal, Bronze Service Star and the United Nations Service Medal.  After their marriage, Harley and Evelyn made their home in several locations in Bourbon County, Kansas, moving to Devon, Kansas in 1970.  Harley spent his life as a farmer, and also worked many years as the manager of Monticello Farms.

Services are planned for Friday, April 13, at 2:00 p.m. at the Bethel Community Baptist Church, 1397 155th Street, in Fort Scott, Kansas, with graveside services and military rites to be performed at the Pleasanton Cemetery.  Visitation will be at the church at 1:00 p.m. before the service.  Arrangements are entrusted to the Konantz-Cheney Funeral Home in Fort Scott, Kansas. Condolences may be submitted to the online guestbook at konantz-cheney.com.