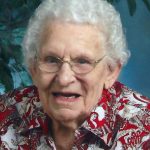 Hattie Lela Homan, 99, of Uniontown, Kansas passed away Friday evening, January 19, 2018, at the Medicalodge Nursing Home.  She was born December 17, 1918, in Rolla, Kansas, the daughter of LeRoy Johnathan and Lena Effie (Saul) McMillan. She married Leslie Otto Homan September 28, 1944, in Lawrence, Illinois. He preceded her in death March 2, 1982.

Hattie was a member of the First Missionary Baptist Church of Uniontown, and she played the guitar and the banjo with the Kansas Old Time Fiddlers, and also the Pickers & Singers.

Hattie is survived by her two sons, Leslie Marvin Homan and wife Rachel, of Manteca, California, and Henry O. Homan and wife Patty, of Redfield, Kansas; a sister, Velma Hittle of Hugoton, Kansas; six grandchildren; thirteen great-grandchildren, and four great-great-grandchildren. In addition to her husband, Hattie was also preceded in death by her parents; twin infant daughters; a grandson, Christopher Homan; a daughter-in-law, Mary Homan. She was also preceded in death by two brothers, Isaac died when he was just three years old. Her other brother, Marvin, died when his submarine, the Sugar Deuce 8 (S-28), went down during WWII.

Rev. Marty DeWitt and Steve Hittle will conduct funeral services for Hattie 10:00 a.m., Thursday, January 25, 2018, at the Konantz-Cheney Funeral Home with burial following at the Fort Scott National Cemetery. The family will receive friends Wednesday evening January 24, 2018, from 6:00-7:00 p.m. at the funeral home. Memorial contributions may be made to the Uniontown Missionary Baptist Church Building Fund and left in the care of the Konantz-Cheney Funeral Home, 15 W. Wall Street, PO Box 309, Fort Scott, KS 66701. Condolences may be submitted to the online guestbook at konantz-cheney.com.