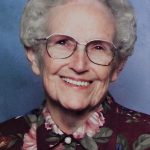 Helen Louise Harper, 95, of Uniontown, passed away Wednesday evening April 20, 2022, at Via Christi Hospital in Pittsburg. She was born February 18, 1927, in Fort Scott, Kansas, the daughter of Carl William and Sophia Mary (Leitz) Eshelbrenner. She married Floyd Gilbert Harper on January 18, 1953, in Fort Scott, and he preceded her in death August 18, 2019.

Helen was a Registered Nurse and a homemaker. She loved to sing, solve crossword puzzles, and play games like Dominos, Uno, and other card games. She liked to watch KU Basketball, the Royals and Chiefs, and she loved to watch her kids and grandkids play sports. Helen’s goodbyes always included saying “watch out for the deer.”

Bob Martin will officiate graveside services at 10:30 a.m. on Monday April 25, 2022, at the Uniontown Cemetery under the direction of the Konantz-Cheney Funeral Home.  The family will then have a Celebration of Life at the Uniontown Community Center following services. Memorial contributions may be made to the Horton House Activities Fund, and may be left in the care of the Konantz-Cheney Funeral Home, 15 W. Wall Street, P.O. Box 309, Fort Scott, Kansas, 66701. Condolences may be submitted to the online guestbook at konantz-cheney.com.