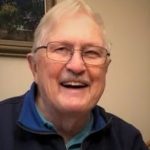 Hubert Lee Adams, 82 of Westland, Michigan, formerly of Arma, Kansas and Rossville, Kansas, passed away Saturday, April 18, 2020 at St. Mary’s Hospital in Livonia, Michigan.  He was born December 19, 1937 on the Nord Family Farm in Bronaugh, Missouri the son of Clarence Kermit and Viola Lea (Mahan) Adams.  He was the oldest of eight children.  He married Elizabeth Darlene Mentola June 20, 1964, she preceded him in death on October 25, 2017.

Hurb graduated from Nevada High School in 1955 and then received his Bachelor’s degree from Missouri School of Mines in Rolla, Missouri in 1959 and then, his Master’s degree from Wayne State University in Detroit Michigan.  He served in the U.S. Army Corps of Engineers as an Officer in 1961 and 1962 at Fort Leonard Wood, Missouri.  He was a Chemical Engineer for various chemical companies in his civilian career.  Hurb, being a man of faith, deeply believed that in Heaven and lived his life accordingly.  Also, he was a Citizen of the Potawatomi Nation and was proud of his heritage.  He was a member of the American Legion of Lamar, Missouri.

He will be interred with his wife, Elizabeth Darlene at the U.S. National Cemetery No.1 in Fort Scott, Kansas in a private ceremony under the direction of the Konantz-Cheney Funeral Home.   Memorials may be given to the New Hope United Methodist Church Food Bank of Allen Park, Michigan, donations may be sent to or left in the care of the Konantz-Cheney Funeral Home, P.O. Box 309, 15 W. Wall St., Fort Scott, KS  66701.  Condolences may be submitted to the online guestbook at konantz-cheney.com.