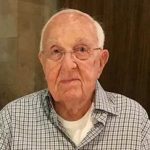 Hubert Milton Yates, 93, formerly of Fort Scott, passed away peacefully on April 18th, 2019, at his home in San Antonio, Texas, with family by his side. He was born on December 4th, 1925, in Fort Scott, Kansas, to Walter and Nettie Yates. Hugh was the youngest of their 5 sons.

After graduating high school in Kansas, Hugh served his country honorably as a United States Marine during the Second World War. While fighting in one of the fiercest battles in the Pacific Campaign on the island of Iwo Jima, he was captured and held briefly as a prisoner of war. After he was honorably discharged from the Marine Corps, he moved to South Texas and developed a successful career as a self-made entrepreneur, primarily in the automobile sales and transportation industry.

Hugh had a passion for cars, barbecue, nature, and animals. He will be remembered by his friends and family for his quick wit, his warm humor, and most importantly, his kind and generous personality.

He is survived by his two children, John Yates (Jessica) and Sara Yates Morgan (Dave); three grandchildren, Melis Kuris Tumen (Mert), Eren Kuris, and Noah Yates (Aleksia); one great-grandchild Aiden Yates, and his dog, Missy whom he loved dearly. His memory will live on through the many lives he touched.
Private graveside services will be held on May 2, 2019, in Fort Scott, Kansas, where he will be laid to rest with his parents and siblings, under the direction of the Konantz-Cheney Funeral Home, 15 W. Wall Street, PO Box 309, Fort Scott, KS, 66701. Condolences may be submitted to the online guestbook at konantz-cheney.com.