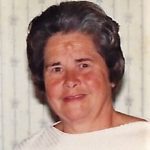 Illah worked in Data Input for The Western Insurance, and retired from American States Insurance in 1987.

Rev. Ken Ansell will conduct Funeral Services at 10:00 a.m. Tuesday, July 26, 2022, at the Konantz-Cheney Funeral Home, with burial following at the Fort Scott National Cemetery. Memorial contributions may be made to Children’s Mercy Pediatric Cardiology Unit and may be left in the care of the Konantz-Cheney Funeral Home, 15 W. Wall Street, P.O. Box 309, Fort Scott, Kansas, 66701. Condolences may be submitted to the online guestbook at konantz-cheney.com.