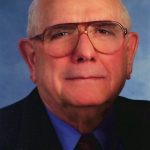 Jim attended Fort Scott schools and St. Andrews Episcopal Church, where he sang in the church choir. He later served four years in the US Navy. With his father, they operated McNeley Power Equipment Company for many years. Jim studied for the ministry and became a priest and later the Bishop, in the Anglican Catholic Church. He served in the church in Fort Scott and later in Kansas City. After retirement, he attended All Saints Anglican Church in Chicopee, Kansas.

Rt. Rev. Martin Dickinson will officiate services at 12:30 p.m. Thursday, May 27, 2021, at the Konantz-Cheney Funeral Home with burial following at the Fort Scott National Cemetery at 1:30 p.m. Memorials are suggested to All Saints Anglican Church and may be left in the care of the Konantz-Cheney Funeral Home, 15 W. Wall Street, P.O. Box 309, Fort Scott, Kansas, 66701. Condolences may be submitted to the online guestbook at konantz-cheney.com.