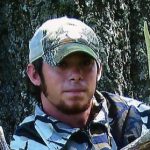 JASON WAYNE BOLINGER, age 39, of Fort Scott, Kansas, passed away peacefully on Friday, June 14, 2019, after a lengthy battle with brain cancer, at the home of his parents, Robert and Cherie Collins, where he resided.  He was born March 1, 1980, in Fort Scott, Kansas.  He attended Uniontown and Fort Scott schools.   Jason worked construction his entire life.   Jason’s passion was hunting and he was a dedicated bowhunter.

Following cremation, Father Yancey Burgess will conduct graveside services 11:00 a.m. on Friday, June 21, 2019, at St. Mary’s Catholic Cemetery in Fort Scott, Kansas, under the direction of the Konantz-Cheney Funeral Home. Memorials are suggested to the Austin and Barret Bolinger Education Fund in care of Cherie Collins, 1496 Maple Rd, Fort Scott, KS 66701 or can be left in care of Konantz Cheney Funeral Home, 15 W. Wall St, Fort Scott KS 66701. Condolences may be submitted to the online guestbook at konantz-cheney.com. A Celebration of Life at the home of Robert & Cherie Collins will follow graveside services.