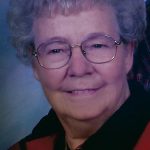 Norma Jean Wiley, 87, of Fort Scott, passed away Monday evening, April 27, 2020, at the St. Luke’s Hospice House in Kansas City, Missouri.  She was born April 18, 1933, in Fort Scott, Kansas the daughter of Steve L. and Louise Eunice (Shelton) Mudd.  At an early age, her mother married Burton Allen and he and her mom raised her.  She married Lloyd Wiley on May 17, 1953, in Fort Scott, Kansas, he survives of the home.

She graduated from Fort Scott High School with the Class of 1951.  She spent most of her life being a Bookkeeper for various businesses and entities including the Bourbon County Clerk, Ray Shepherd Motors, and the Sale Barn.

She is survived by her husband, Lloyd of the home, a son, Pete Wiley of Fort Scott, a sister, Pat Price of Fort Scott, a daughter-in-law, Cindy Wiley of St. Francis, Kansas, three grandchildren, Dustin Wiley and his wife, Randi, Darin Wiley and his girlfriend, Taylor Armstrong and Cheyenne Von Krosigk, and her husband, Randall, and one great-grandson, Weston Lyn Wiley.  She was preceded in death by her parents, a Son, Lyn Eugene Wiley, her daughter-in-law, E. Jeanie Wiley.

Services will be private with burial at the Memory Gardens of Bourbon County Cemetery under the direction of the Konantz-Cheney Funeral Home.  The family suggests memorials to “Care to Share”, donations may be sent to, or left in the care of the Konantz-Cheney Funeral Home, 15 W. Wall St., P.O. Box 309, Fort Scott, Kansas   66701.  Condolences may be submitted to the online guestbook at konantz-cheney.com.