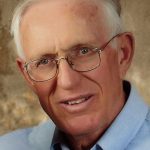 Jesus stretched out his loving arms and took John to live in his heavenly home on Wednesday evening July 31, 2019, at Country Place Memory Care in Fort Scott. John was born on February 7, 1945, at the family farm home near Redfield, Kansas.  He was the oldest child of George Daniel and Clara Alice (Todd) Coyan.

John attended county grade schools and graduated from Uniontown High School with the Class of 1963.  He was employed by Peerless Products from 1963 until 1966.  He was then employed by Key Industries for over 28 years.  At the time he left, John was the supervisor over shipping and receiving, with responsibilities which included ordering and purchasing of new equipment including tractors, trailers and various warehouse equipment.  During the 1986 flood, John waded through the flooded Key Building to turn off the electricity, thus averting a potential fire.

He then obtained the position of his dreams when he was hired by USD 234 as a bus route driver and bus maintenance.  He first drove both a regular route and a kindergarten route.  He thoroughly enjoyed the kindergarten children and was proud of the fact that he was able to teach the children the days of the week.  He then became the route driver for physically handicapped children.  He loved the constant interaction with the school children.  He retired in 2013 after 18 years of service.

During this entire time, he maintained a small cow calf operation raising Beefmaster Cattle, and baling hay for the cattle.   John was very proud of the fact that his cows were gentle enough to pet and eat range cubes out of his hand.  John continually had St. Bernard dogs.  The dogs always accompanied him to check cows and were his constant companions.  Also, John was very fond of cats.  In his younger days he enjoyed racing stock cars.  He was an avid NASCAR fan, having attended many races including the Dayton 500.

He was a member and worshiped at First Baptist Church in Fort Scott; having been baptized at an early age.  He also held memberships in Xenia Lodge #47 and Olive Chapter #13 Order of the Eastern Star.  John was a lifetime member of the Bourbon County Fair Association. For several years he was a community leader for the Pawnee 4-H Club.  Until his health declined, he was a regular blood donor. John was happiest when he was outside enjoying the beauty of God’s creation, and visits from his all of his grandchildren.

On February 14, 1966, he married Barbara Ann Rhoades.  To this union two daughters were born; Bernetta Alice and Suzann Denise.  Barbara preceded him in death.

On July 2, 1993, he married Karen Endicott in Fort Scott, Kansas, and Karen survives at the home.  He is also survived by his daughters and their families; Bernetta and Sean Stewart of Henderson, Nevada and their sons Rhoades and Victory; Suzann and Ahmad Audi of Prairie View, Illinois and their children Ali, Jawad and Layla.  A stepson Joe Raines and wife Gina of Norfolk, Virginia, two step granddaughters; Madelyn Raines of Alliance, Ohio, and Arminda Raines and John Drexler of Irwin, PA.

He is also survived by a brother and his wife, George and Lois Coyan of Redfield and two sisters Sharon Shirley and Janette Danley both of Fort Scott; a brother-in-law and his wife, Oscar and Ruth Endicott; two sisters-in-law and their husbands, Billie and Steve Young and Michele and Greg Schick, all of Fort Scott, and a sister-in-law Debbie Endicott, also of Fort Scott.  Also surviving are three nephews, Doug Coyan, Mike Coyan and David Lee; two nieces, Ronda Jantz and Dawn Nichols, and two girls who were very special to his heart – Katie Racy and Samantha Racy.

Pastor Norman Tillotson will conduct a Celebration of Life on Wednesday, August 7, 2019, at 10:00 a.m. at the First Baptist Church, 123 Scott Avenue under the direction of the Konantz-Cheney Funeral Home. Burial will follow in the Pleasant View (Large Cemetery).  The family will receive friends on Tuesday, August 6, 2019, from 6 pm to 7 pm at Konantz-Cheney. Memorials are suggested to either Care-to-Share or the First Baptist Church and may be left in the care of the Konantz-Cheney Funeral Home, 15 W. Wall Street, PO Box 309, Fort Scott, KS 66701. Condolences may be submitted to the online guestbook at konantz-cheney.com.