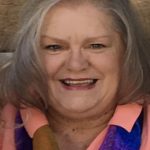 Karen (Mabery) Atkins formerly of Fort Scott passed away suddenly on June 23RD, 2020 in Nixa, Missouri.  Karen was born March 15, 1949, in Fort Scott, Kansas, the only child to Frank and Faye (Duncan) Mabery.  She graduated from Fort Scott High School with the Class of 1967.

She lived and worked in Fort Scott until 2002 when she moved to Nixa, Missouri to help with the family business, Atkins Weatherproofing in Springfield, Missouri, along with her children and husband, she worked and help run the business until her untimely death. She loved car racing, sports, and spending time with her family. She became interested in The Alzheimer’s Association when her cousin was diagnosed. Karen helped organize the Walk to End Alzheimer’s in Abilene, Texas, and for the yearly auction, she made a special quilt that hangs in the office in Abilene TX. She was also interested in family history, traveling, and she made her lifelong wish-trip to Ireland.

Karen was preceded in death by her beloved parents, Frank Lee and Faye Mabery.  Karen was a devoted daughter and caretaker to her parents in their later years.

Karen leaves behind to cherish her memory, husband, Wayne, and her children all of Nixa, Missouri, Karalee Taylor (John Lowe) and Frank Atkins, grandchildren, Kelby Taylor, Madison Shelden, and Tru Atkins, great-grandchildren, Sophie Taylor, Taxen and Asher Cosens.  She also leaves behind her lifelong friends and cousins who will cherish a lifetime of memories.

Karen grew up with an idyllic childhood in Fort Scott surrounded by doting parents and a huge extended family, including incredible aunts, uncles, and cousins.  She enjoyed dozens of close friends and a loving relationship with her cousins.  She was blessed with smalltown, rural hometown living where she and friends could explore the streets and countryside of Fort Scott on horseback.

Karen was an avid animal lover and her family is asking that in lieu of flowers, donations be made to the donate to C.A.R.E Rescue Animal Shelter or the Missouri Forget-Me-Not-Horse Rescue and Sanctuary, and may be sent to or left in the care of Konantz-Cheney Funeral Home, 15 W. Wall St., P.O. Box 309, Fort Scott, Kansas   66701.

Rev. Chuck Russell will conduct Graveside services, 2:00 p.m., Friday, July 10, 2020, at Memory Gardens Cemetery in Fort Scott, Kansas under the direction of the Konantz-Cheney Funeral Home, Fort Scott, Kansas.  Condolences may be submitted to the online guestbook at konantz-cheney.com.