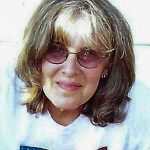 Karin “Sue” Morrison, 67, of Redfield, passed away Friday, February 19, 2021, at Ascension Via Christi Hospital in Pittsburg due to complications from COVID. She was born July 21, 1953, in Colony, Kansas, the daughter of Russell Don and Vinita Ruth (Potter) Robb. She married Leonard Dean “L.D.” Morrison June 31, 1972, in Xenia, Kansas, and he survives of the home.

Sue graduated from Blue Mound High School in 1971. Over the years, Sue worked for Key’s, The Western, FSCC Truck Driving School. She retired from Valu Merchandisers in December of 2018 after eleven years with the company. Sue was a member of Marmaton Community Church in Redfield. She enjoyed spending time with her family, her cats and her chickens, and she loved to garden.

In addition to her husband L.D., Sue is also survived by her two sons, Clint Morrison of New Orleans, Louisiana, and Jeff Morrison, of the home; two sisters, Dona Spencer and husband Harry of Fort Scott, and Kathy Budd and husband Albert of Richards, Missouri; three step-grandchildren, Lance, Michael, and Donovan; two nieces, Amber Cain and Holly Fritter; and five nephews, Albert, Russell, and David Budd, and Jess and Andrew Spencer. She was preceded in death by her parents.

Following cremation, the family will hold private services at a later date. Services are under the direction of the Konantz-Cheney Funeral Home. Memorials may be made to the American Cancer Society and may be left in the care of the Konantz-Cheney Funeral Home, 15 W. Wall Street, P.O. Box 309, Fort Scott, Kansas, 66701. Condolences may be submitted to the online guestbook at konantz-cheney.com.