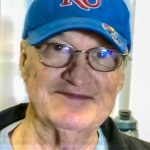 Larry Wayne Porter, 78, of Fort Scott, passed away Tuesday evening, February 23, 2021, at the Horton House in Fort Scott, Kansas.  He was born June 14, 1942, in Hastings, Nebraska the son of Harry Edward and Thelma (Chenoweth) Porter. He married Georgia Paulette Kersbergen September 7, 1963, and she preceded him in death September 6, 2000. He married Susan Marie Daly February 5, 2002, and she survives of the home.

Larry served in the US Army for six years with three years in Germany as a Radio Teletype Operator. He worked in management and sales in the auto industry. Larry was a member of Grace Baptist Tabernacle. He loved his family, and he loved bowling and golf.

In addition to his wife Susan, Larry is also survived by his daughter Holly Fischer and husband Roger, of Wichita, Kansas; his stepchildren, Lynna and Larry Myer of Lancaster, Kansas, Troy and Rebecca Landers, and Jeff and Julie Daly, all of Fort Scott; a step-daughter-in-law, Jackie Hereford; a grandchild, Josh Fischer of Wichita, Kansas; nine step-grandchildren, Dalton Landers, Jake and Cindy Hereford, Emma Daly, all of Fort Scott, Noah Daly of Pittsburg, Kansas, Jacob and Baylee Crahan of Pleasanton, Kansas, Hunter Landers, Hayden Landers, both of Lansing, Kansas, Ashton and Kierstin DeNoon of Olathe, Kansas, and Lisa and Shawn Rice of Kansas City, Missouri; and six great-grandchildren. He was preceded in death by his parents, all of his brothers and sisters, a stepson, Danny Hereford, and his first wife, Georgia.

Following cremation, the family will hold private services at a later date under the direction of the Konantz-Cheney Funeral Home. Condolences may be submitted to the online guestbook at konantz-cheney.com.