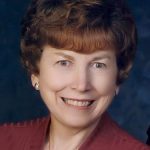 Marjorie Dee Stringer, 85, of Fort Scott passed away Tuesday, December 15, 2020, at the Presbyterian Village.  She was born August 17, 1935, in Chanute, Kansas, the daughter of Joel Emmett and Irma Joy (Woodell) VanMeter. She married Wayne Stringer December 30, 1954, in Thayer, Kansas. He preceded her in death September 15, 2013.

Marjorie was a secretary and treasurer for Fort Scott High School for many years. She was a member of the First Southern Baptist Church, Bourbon County Republicans, and she was also a member of the Iza Stompers and the City Hand Bell Choir. Marjorie was also very active in Starlight FCE, the Camping Club, and the Garden Club.

In addition to her husband Wayne, she was also preceded in death by her parents, twin sister Marian Carson, another sister Shirley Powers, a brother Wayne VanMeter, and daughter-in-law Cynthia Stringer.

Rev. Ken Ansell will conduct private family funeral services Monday, December 21, 2020, at the Konantz-Cheney Funeral Home with burial following at the Fort Scott National Cemetery. The family will receive friends Sunday evening from 4:00 until 6:00 p.m. at the funeral home. Memorial contributions may be made to the Good Samaritan Fund at Presbyterian Village or Gideons and may be left in the care of the Konantz-Cheney Funeral Home, 15 W. Wall Street, P.O. Box 309, Fort Scott, Kansas, 66701. Condolences may be submitted to the online guestbook at konantz-cheney.com.