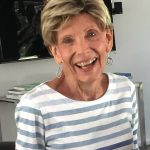 Marsha Ann Hudson, age 69, passed away surrounded by family on Wednesday, December 9, 2020. She was the beloved wife of 48 years to Leigh Carleton Hudson; dear mother of Tyler William Hudson (Jenn) and Ryan Carleton Hudson (Alka); and cherished grandmother to Reece Ricci Hudson, Rory Ann Hudson, Uma Hudson, and Ian Hudson. She treasured her family, her friends, her church, and her community in Fort Scott.  She was a person of deep faith, integrity, beauty, positivity, frugality, and love.  Marsha was born in Wichita, Kansas, December 5, 1951, the daughter of Ralph William and Mildred L. (Parker) Corn and younger sister to Jim Corn (Cheri).

A proud graduate of Emporia State Teachers College in 1973, she was a member of the Tri Sig Sorority and won “Miss Sunflower” as the most photogenic student. After graduation, Marsha was a home economics teacher for several years and helped to put her husband through law school.

Marsha was an active member of the First Presbyterian Church of Fort Scott, having served as both Deacon and Ruling Elder.  Marsha was strongly committed to the local schools, and in particular the debate and forensics programs, and she helped these programs take root and blossom. She was surrounded by many strong friends throughout the community and was both grateful and proud to live in Fort Scott. More than anything, she had a remarkable ability to get along with—and relate to—everybody.  Marsha’s go-to phrase was: “If you can get along with people, you can do anything.” As so many in Fort Scott can confirm, Marsha lived this statement with a smile on her face every day of her life.

Her family is extremely thankful for the Kansas City Hospital and Palliative Care team. Due to the public health situation, the family will be conducting a family-only graveside service under the direction of the Konantz-Cheney Funeral Home, and a celebration of life will be next year (on a date to be announced and circulated by her family). In lieu of flowers, the family requests that donations be made in her name to First Presbyterian Church in Fort Scott. Condolences may be submitted to the online guestbook at konantz-cheney.com.