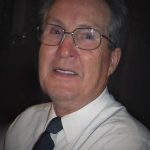 Marvin Lee Taylor, 81, of Fort Scott, Kansas, passed away at his home Friday, August 5, 2022. He was born August 3, 1941, in Fort Scott, the son of Joseph Marvin and Geneva Francis (Hall) Taylor. He married Dorothy Nell Bloesser on November 26, 1966, in Redfield, Kansas, and she survives of the home.

Marvin served in the US Army from November 7, 1963, until being released from active duty on November 5, 1965. He worked for the railroad, retiring after 36 years. He was a member of Post 25 American Legion and Color Guard and the First Southern Baptist Church in Fort Scott.

Pastor James Collins will conduct funeral services at 11:30 a.m. Friday, August 12, 2022, at the Konantz-Cheney Funeral Home, with burial following at the Fort Scott National Cemetery. The family will receive friends 6:30 p.m. – 7:30 p.m. Thursday evening, August 11, 2022, at the funeral home. Memorial contributions may be made to Post 25 American Legion or First Southern Baptist Church, and may be left in the care of the Konantz-Cheney Funeral Home, 15 W. Wall Street, P.O. Box 309, Fort Scott, Kansas, 66701. Condolences may be submitted to the online guestbook at konantz-cheney.com.