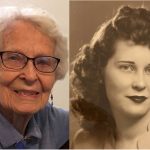 Services will be held at a later date.

Mary Barrett Irvin, 99, of Fort Scott, formerly of Rogers, Arkansas, passed away Wednesday, May 8, 2020, at her home in Presbyterian Village. She was born in Murdock, Minnesota, on August 1, 1920, to Agnes and Earl Barrett. She was preceded in death by her parents, six of her eight siblings, and Willis Hugh Irvin, her husband of 74 years.

Mary graduated from St. Cloud, Minnesota School of Business, moving to San Francisco to work as a secretary during the war. There she met Hugh while his ship was in the Navy yard. They were married on June 19, 1945, before her new husband left to prepare for the invasion of Japan. After his discharge, the nationwide adventure began. Mary and Hugh lived in 11 states, adding three children along the way- Roger in Florida, David in Omaha, and Barbara in New Jersey. Mary and Hugh retired to Rogers, Arkansas, in l981 from Fairfax, Virginia. She was active as a volunteer at St. Mary’s hospital, St. Vincent De Paul church, and Meals on Wheels. She belonged to Roger’s Friendship Club and enjoyed playing bridge. Presbyterian Village in Fort Scott was home since 2013. There she was a member of Mary Queen of Angels Church.

Mary was dedicated to Hugh, her family, and the many friends they made over the years as they moved across the country. Together they embraced square dancing in Texas, both making fast friends and Mary making the costumes. She pursued new places and relationships with equal interest. Mary grew up in the difficult time of the great depression and she became strong and confident in her ability to succeed. It was hard, if not impossible, to win an argument with her. She managed the family’s business with the organization and efficiency of a CEO—overseeing multiple moves, setting up a dozen different homes, managing the finances, helping her kids through college. Hard work never deterred her. Mary was a problem solver who rarely failed to find a solution to issues that others didn’t know they had. She will be remembered as a talented seamstress, furniture refinisher, decorator, painter, and lifelong volunteer to friends, relatives, and her community. She excelled at many things and wouldn’t submit to any praise. Her presence remains in the good works she left behind.

The family would like to express their appreciation to Integrity Hospice for their extraordinarily kind and attentive care of Mary over the last few months and Presbyterian Village staff for their compassionate support over many years.

Interment will be at the Fort Scott National Cemetery at a later date. In lieu of flowers, the family suggests donations to Presbyterian Village of Fort Scott Good Samaritan Fund. Contributions may be sent to or left in the care of the Konantz-Cheney Funeral Home, 15 W. Wall St., P.O. Box 309, Fort Scott, Kansas   66701.  Condolences to the family may be submitted to the online guestbook at konantz-cheney.com.