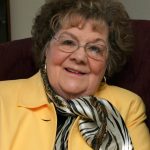 Mary Del Sparks, age 93, passed away on Friday, January 10, 2020, at  Country Place Senior Living in Fort Scott where she had been a resident for two years. Mary Del was born on September 21, 1926, in Pittsburg, KS. She was the daughter of Peter A. and H. Leota (Dixon) Esch.  She attended St. Mary’s School in Pittsburg and graduated from St. Mary’s Colgan High School with the class of 1944. Mary Del graduated from Kansas State Teachers College of Pittsburg, now called Pittsburg State University, in 1948. She earned a Bachelor of Science degree in Education.

Mary Del married James (Sparky) Sparks of Arma, Kansas after meeting in college. They were married on August 8, 1948, at Our Lady of Lourdes Catholic Church in Pittsburg. Sparky & Mary Del had four daughters. Jim preceded her in death on June 30, 1991.

Mary Del taught school in Crawford and Bourbon Counties. She was a member of Mary Queen of Angels Catholic Church, Chapter FU PEO and past president of Alpha Sigma Alpha Sorority.  Mary Del devoted her life to caring for her friends and family. She was a loyal friend to many who found her always available when needed. She was never too busy to offer support to others.  Mary Del’s sense of style and fashion were outdone only by her quick wit and delightful sense of humor, always gracious. Mary Del was loved and admired by all who knew her.

Rosary and Mass of Christian Burial will be held for the family. Graveside services for friends and family will be at Fort Scott National Cemetery at 12:30 p.m. on Friday, January 17, 2020.  Family will receive friends following the graveside services at the Empress Event Center, 7 N. Main in Fort Scott. The family suggests memorial contributions be made to Fort Scott Area Community Foundation in care of Konantz-Cheney Funeral Home, 15 W. Wall Street, PO Box 309, Fort Scott, KS, 66701. Condolences may be emailed to the online guestbook at konantz-cheney.com.