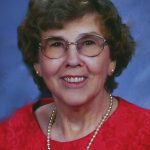 Mary Irene “Sug” Beckford, 90, formerly of Fulton, Kansas passed away Thursday morning, December 23, 2021, at Lawrence Memorial Hospital in Lawrence, Kansas.  She was born February 13, 1931, in Devon, Kansas, the daughter of George Franklin and Mary Elizabeth (Townsend) Snyder. She married Charles L. Beckford on August 27, 1950, in Fulton, Kansas, and he preceded her in death on October 19, 2008.

Sug graduated from Fulton High School. She helped plan many alumni reunions. She worked for The Western Insurance as a supervisor in the Key Punch department for 21 and a half years. She retired when The Western closed in 1988.

She was a member of the West Liberty United Methodist Church, West Liberty UMW, and Olive Chapter 13 OES. She was Past Matron and Past District Aide OES, Past Worthy High Priestess Order of the White Shrine of Jerusalem, and was a Reach to Recovery volunteer for 15 years. She served as Sunday School Treasurer for 25 years, was Past UMW President, member and secretary for the Osaga Historical Society, and a member of the Fulton Community Center Board. Sug also served as Mother Advisor of Fort Scott Assembly 39 Rainbow Girls. Mary never missed an opportunity to serve in any capacity.

Sug’s favorite pastimes were reading, fishing, and gardening. She was a KU Basketball fan and loved angel food cake. She was known for her banana bread and homemade strawberry ice cream. Her grandkids thought she made the best vegetable soup and chili ever. She loved all of her family, but had a special relationship with her great-granddaughters Willow, Maddie, and Evie, and was looking forward to meeting her great-grandson, Donovan.

Survivors include her children, Randy L. Beckford and wife Carmen, of Fulton, and Vickie S. Lord and husband Gerald, of Lawrence, Kansas; a brother, Alva Snyder, of Independence, Kansas; sister-in-law Joyce Sipe, Fort Scott; seven grandchildren, fourteen great-grandchildren, and numerous great-great-grandchildren. In addition to her husband Charles, she was also preceded in death by her parents, two brothers, John E. Snyder, and George J. Snyder, two granddaughters, and one grandson.

Memorial services for Sug will take place at 10:00 a.m. Saturday, April 23, 2022, at the West Liberty United Methodist Church, and she will be interred with her husband Charles in the Mapleton Cemetery under the direction of the Konantz-Cheney Funeral Home. Memorial contributions may be given to West Liberty United Methodist Church on the day of the service or mailed to: West Liberty Treasurer c/o Kathy Valentine, 2638 Tomahawk Road Fort Scott, KS 66701. Condolences may be submitted to the online guestbook at konantz-cheney.com.