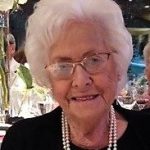 Mrs. Mertz was born and was raised in Fort Scott. She was born on February 6, 1921, the daughter of Harlan and Mabel (Hicks) Spencer. She graduated from Fort Scott High School in 1939. She and Jim Mertz were married January 20, 1945, at their home in rural Fort Scott, and he preceded her in death May 30, 1982.

She was the owner of The Horseshoe Ranch where she and Jim had horses and cattle throughout their lives. She worked as a bookkeeper at Montgomery Wards and at The Vogue, she was Deputy Clerk of the District Court, then started Mertz Tax Service at their home in the country. After moving to “town” she continued Mertz Tax Service until she was appointed to the Kansas Board of Tax Appeals in 1989 and served a four-year term. During this tenure, she was proud to attend college classes at the University of Reno, Nevada. She also worked several years as an Enumerator for the State of Kansas, she was a House Mother for Baker University, University of Kansas, and Kansas State University in her “retirement” years!

Mrs. Mertz was full of spirit and energy; age was never a factor! She was a member of numerous organizations and clubs throughout her life, and she served as President of many as she loved to help lead and make things better for people. She worked tirelessly on the Gaited Horse Show during the Bourbon County Fair to help earn monies for improvements to the fairgrounds. She was a horsewoman and especially loved parade horses. She participated in parades and horse shows with her silver-mounted saddle and fancy parade outfits first on her paint horse Buck and then palomino Sonny through the course of her life. Following her horsewoman days, she became an avid golfer. She was a member of Fort Scott Country Club, Crestwood Country Club, Topeka Country Club, and golfed with Women’s leagues throughout the state and the world when she traveled to Africa and golfed at Victoria Falls, as well as in Europe.

She was a member of the First United Methodist Church, a member of the Bourbon County Conservation Supervisors Board, Federated Women’s Clubs, Beta Sigma Phi, The Area on Aging for Kansas, Elks, United Methodist Women’s Club, PEO. She was a volunteer at Mercy Hospital, volunteered with the Red Cross, American Heart Association, and Meals on Wheels. She was also a member of the Daughters of the Nile, a former Mother Advisor for Rainbow Girls, attended Fort Scott Shrine Club events, and Mirza Temple Pittsburg, KS women’s events.

Rev. Steve Cole will conduct funeral services at 10:30 a.m. Friday, November 19, 2021, at the Konantz-Cheney Funeral Home with burial following at the Evergreen Cemetery. The family will receive friends Thursday evening November 18, 2021, from 5:00-6:00 p.m. at the funeral home. Memorials are suggested to the First United Methodist Church and may be left in the care of the Konantz-Cheney Funeral Home, 15 W. Wall Street, P.O. Box 309, Fort Scott, Kansas, 66701. Condolences may be submitted to the online guestbook at konantz-cheney.com.