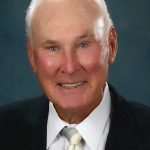 Gerald O. “Nate” Beaman, 93, passed away Wednesday, February 21, 2018, at A Country Place Senior Living in Fort Scott. He was born August 7, 1924, in Uniontown, Kansas, the son of Ray and Ruth (Turner) Beaman. He married Mary Kathryn “Kay” Henson on January 11, 1947, in Fort Scott, Kansas, while attending Fort Scott Junior College, and they recently celebrated their 71st Wedding Anniversary, January of 2018.

Nate was a Hall of Fame Athlete, both at Fort Scott Junior College and Pittsburg State University, and he played semi-pro baseball as a catcher and outfielder after serving in the US Navy, a WWII Veteran. He was a coach, math teacher, and High School Principal for thirty years in Imperial Valley, California. When he retired, he and Kay moved back to the farm where he was born in Uniontown, Kansas.

Rev. Connie McKee will conduct graveside services, 2:00 p.m. Monday, February 26, 2018, at the Uniontown Cemetery under the direction of the Konantz-Cheney Funeral Home. The family will receive friends Sunday afternoon February 25, 2018, from 2:00-4:00 p.m. at the funeral home. Memorial contributions may be made to Harry Hynes Hospice, and left in the care of the Konantz-Cheney Funeral Home, 15 W. Wall Street, PO Box 309, Fort Scott, KS 66701. Condolences may be submitted to the online guestbook at konantz-cheney.com.