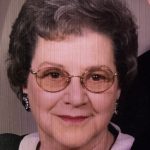 Norma Jean Cowan, 89, of Nevada, Missouri and formerly of Devon, passed away late Tuesday evening, September 21, 2021, at Freeman Hospital in Joplin, Missouri. She was born May 30, 1932, in Fort Scott, Kansas, the daughter of Archie Jesse and Irma E. (Shoemaker) Riggs. She married Billy Joe Cowan on August 12, 1951, in Devon, Kansas, and he survives of the home.

Norma worked as a secretary and bookkeeper, for National Land Bank in Fort Scott, as well as The Western Insurance Company. Together, Norma and Bill and the family-owned and operated the Devon Oil Co., from 1954 through 1972. They made their home in Devon, Kansas from 1954 until 1998, then moved to Nevada, Missouri. Norma was a member of the Nevada United Methodist Church.

In addition to her husband Bill, Norma is also survived by her children, Diana S. Cowan of Beaufort, North Carolina, and Phillip Alan Cowan and wife Lisa of Tulsa, Oklahoma; two grandchildren, Zachary Cowan and Seth Cowan and wife Lizbeth, and one great-grandchild. Norma was preceded in death by her parents; two brothers, Gerald Riggs, and Harold “Bud” Riggs; sister, Wanda Higgins, and step-grandson, Daniel Mace.

Rev. Sharon Freeman will conduct funeral services at 2:00 p.m. on Wednesday, September 29, 2021, at the Konantz-Cheney Funeral Home. Burial will follow in the Centerville Cemetery. Memorial contributions may be made to the Nevada United Methodist Church and may be left in the care of the Konantz-Cheney Funeral Home, 15 W. Wall Street, P.O. Box 309, Fort Scott, Kansas, 66701. Condolences may be submitted to the online guestbook at konantz-cheney.com.