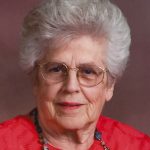 Norma Jean Fitzsimmons, 90, formerly of Fort Scott, passed away Tuesday morning, August 23, 2022, at Saint Francis Hospital in Tulsa, Oklahoma. She was born July 8, 1932, in Redfield, Kansas, the daughter of Harry Earl and Pearl (Gunsolley) Wilson. She married Richard Donald Fitzsimmons on August 16, 1950, and he preceded her in death May 4, 2010.

Norma is survived by her sons, David Fitzsimmons, of Waynesville, Missouri, Mike Fitzsimmons, of the Lower 48, and Kevin and wife, Brenda Fitzsimmons, of Tulsa, Oklahoma; a sister, Barbara Bolinger, of Olathe, Kansas; a son-in-law Matt Townsend of Fort Scott, Kansas; eight grandchildren, and nine great-grandchildren. In addition to her husband, she was also preceded in death by her parents, a daughter, Julie Townsend; five sisters, Wylma Pearl Campbell, Juanita Durbin, Una Bowles, Thelma Darlington, and Dora Ellen Henning; and a brother, Harry Duane Wilson.

Funeral services will be at 9:00 a.m. Thursday, September 1, 2022, at the Konantz-Cheney Funeral Home, with burial following at 10:00 a.m. at the Fort Scott National Cemetery.  Memorial contributions may be made to the First United Methodist Church and left in the care of the Konantz-Cheney Funeral Home, 15 West Wall Street, PO Box 309, Fort Scott, Kansas 66701.  Condolences may be submitted to the online guestbook at konantz-cheney.com.