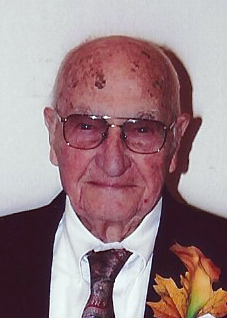 The family will receive friends Sunday afternoon, December 11, 2016 from 3:00 to 5:00 p.m. at the funeral home.
Doctor Dale Cummins will conduct funeral services for Perry 10:00 a.m. Monday, December 12, 2016 at the Konantz-Cheney Funeral Home with burial following in the Fort Scott National Cemetery.

Perry played football for Arcadia High and the team lost no games his Senior year, allowing the team to travel to Arkansas to see the Razorbacks play. He was drafted at the beginning of WWII and served in Hawaii and Japan, and was honorably discharged at the end of the war.

Perry returned to Arcadia and resumed his former job of driving a truck for Dunton’s Furniture. While visiting his brother John in Fort Scott, he learned of a job with the Gas Service Company and was hired. He met Freda Schilling on a blind date set up by friends Tot and Maxine Coyan. They were married June 24, 1946. January 12, 1953, Mary Jean (Jeanie) was born and in 1957 Freda designed a home they could build and afford.

Perry spent many hours after work and on weekends working on their home. The hardwood floor in the living room is still shiny and unmarred. He retired from the Gas Service company at age 62 to care for Freda who had cancer. She died March 18, 1984.

Perry later married Mary Gable of Arcadia and she later died. He then married Betty Shoemaker of Fort Scott, and she preceded him in death also.

Perry was active in the Freedom Spirit Church and enjoyed working with wood and helping in the Church as needed. When health allowed, he folded the America Flag for many funerals at the National Cemetery as a member of the Olson-Frary-Burkhart Post 1165 Veterans of Foreign War. He also drove the truck that pulled the trailer holding the flags that lined the street and entrance to the National Cemetery.

Perry was very pleased that his great-granddaughter that was born in July of 2016 was named Perry, and many photos were taken of him holding her.

Survivors include his daughter Mary Jean (Jeanie) Hart and her husband Kirk, of Fort Scott, Kansas; granddaughter Samantha B. McGinnis and her husband Dan, Great-grandsons Ethan and Connor McGinnis, and great-granddaughter Perry McGinnis, of Nevada, Missouri; his brother Charles William (Bill) Dobbins, of Frontenac, Kansas; his sister-in-law Darlene Pulliam Dobbins of Fort Scott, and many nieces and nephews. In addition to his wives, Perry was also preceded in death by his parents; an infant sister, Maude Dobbins; brothers John Dobbins and his two wives Olive (Coyan) Dobbins and Josephine (Saunders) Dobbins, Ray Dobbins, and Dan Dobbins and his wife Carolyn (Whiteside) Dobbins; a sister Doris Herlocker and her husband Eldon; and brothers and sisters-in-law Orville Dobbins and  and Emma (Davidson) Schilling, and Delbert and Gloria (Tucker) Schilling.

Doctor Dale Cummins will conduct funeral services for Perry 10:00 a.m. Monday, December 12, 2016 at the Konantz-Cheney Funeral Home with burial following in the Fort Scott National Cemetery. Military Honors at the cemetery will be conducted by the Olson-Frary-Burkhart Post 1165 Veterans of Foreign Wars Memorial Detail. The family will receive friends Sunday afternoon, December 11, 2016 from 3:00 to 5:00 p.m. at the funeral home. Memorial contributions may be made to the Freedom Spirit Church or the First Church of God Haitian Missions and left in the care of the Konantz-Cheney Funeral Home, 15 W. Wall Street, PO Box 309, Fort Scott, KS 66701. Condolences may be submitted to the online guestbook at konantz-cheney.com.