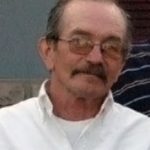 Perry served in the US Army, 82nd Airborne, 2nd Division 508th Infantry, and was stationed in
Fort Bragg, North Carolina. He was a Railroad Conductor for the B.N.S.F. for twenty years,
retiring in 2008.

Perry is survived by his wife, Kathie; his daughter Rachel Fields, of Fort Scott; his son, Jason
Cunningham, of Lockwood, Missouri; four sisters, Linda Wells, of Mapleton, Kansas, Patricia
Fewell, of Blue Springs, Missouri, Kathy McLean, of Olathe, Kansas, and Diana Endicott, of
Bronson, Kansas; two brothers, Bryan Wilson of Pittsburg, Kansas, and John Wilson, of
Bronson, Kansas; six grandchildren, Ellen, William, Addison, Maren, Enych, and Elsie, and
many nieces and nephews. He was preceded in death by his parents; his step-father Don
Petrie; a brother, Michael Wilson; a sister, Tina Wilson; a nephew, Matthew, and a niece, Sara.
Graveside services for Perry Wilson will be 11:00am, Friday, July 6, 2018 at the Fort Scott
National Cemetery. The Family will receive friends at the Konantz-Cheney Funeral Home
Friday from 10:00am until time to leave for the cemetery.