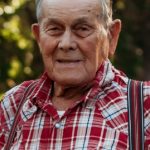 Perry William Bower, 89, of Fort Scott, passed away Wednesday morning, February 23, 2022, at Via Christi Hospital in Pittsburg, Kansas. He was born February 14, 1933, in Redfield, Kansas, the son of Jesse Shotwell and June Kathryn (Dunbar) Bower. He married Helen Louise Winterbower on December 2, 1961, in Hepler, Kansas, and she survives of the home.

Perry graduated from Uniontown High School with the Class of 1951, and received his associate degree from Fort Scott Community College. He served in the US army from 1953 until 1955. He owned his own business, Perry Bower Truck Line for over 55 years, transporting cattle, and retired in 2010.

In addition to his wife Helen, Perry is also survived by his children, Kenneth Bower and wife Stacy, Terry Bower and wife Lori, Lisa Bradley and husband Rudy, and Carla Hambric, all of Fort Scott; a brother, Chet Bower and wife Linda, of Fort Scott; a sister, Roberta Rickman, of Girard, Kansas; eight grandchildren, and thirteen great-grandchildren. He was preceded in death by his parents, two sisters, Mable Green and Margaret Rhodes, four brothers, Jay, Floyd, Leroy, and John; two infant sisters, and a grandson, Jacob Bradley.

Rev. Chuck Russell will conduct graveside services at 10:30 a.m. on Monday, February 28, 2022, at Memory Gardens of Bourbon County Cemetery under the direction of the Konantz-Cheney Funeral Home. Memorial contributions may be made to the Memorial Gardens Maintenance Association, and may be left in the care of the Konantz-Cheney Funeral Home, 15 W. Wall Street, P.O. Box 309, Fort Scott, Kansas, 66701. Condolences may be submitted to the online guestbook at konantz-cheney.com.