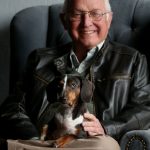 On May 4, 2021, the curtains closed on the life of John Phillip “Phil” Hammons after being on life’s stage for 77 years with his quick wit, his roaring laughter, and his irrepressible personality. The world was graced with Phil’s presence on March 23, 1944 in Fort Scott, KS.  The second son of Carol and Paul Hammons, brother to Stephen Carson.  He was best described by his sainted mother Carol…”He’s never been quite right.”  Following an idyllic childhood he attended the University of Kansas where he was an active, proud member of the Sigma Chi fraternity…”How’d he get in?” you might ask…we’re not sure either!  Phil graduated with a major in Math in 1966 and moved to St. Louis, Missouri to work for Ford Motor Company.  In 1968 he married Susy Sheaks. Their children, Josh and Carey, were born in Missouri, which caused considerable consternation because this clashed with his deep Kansas Jayhawk roots.  The family moved to Fort Scott in 1975, where Phil joined Hammons Realty to work with his dad.  The doors of Hammons Realty Company closed in 2018 after more than 50 total years in operation.  In retirement, Phil continued his real estate activities at H&H Agency and his independent appraisal business. Additionally, he was the treasurer for the Fort Scott USD 234, treasurer for the First United Methodist Church, treasurer for the Class of 1962, and treasurer for his golf group (which was his most challenging pro bono task).

A childhood bout with polio left Phil with a weak upper left arm, and rather than become the target of jokes about his disability, he became the jokester of the room, targeting anyone around him, politically correct or not.  He used it to his advantage.  Most any time he found himself at a disadvantage, he’d cry “But I had THE polio as a child!”

He laughed as uproariously as anyone else at his own jokes; he was his own laugh track.  You may have been at the receiving end of Phil’s witty comments and comebacks.  Even if some of them stung, the secret is…that meant he cared about you.

Admittedly more of a brain than an athlete, believe it or not, Phil had FOUR holes-in-one in his lifetime playing the game he loved with a group of guys he treasured.  An avid KU basketball fan, in February 2020, he took great pride in taking his grandson, Nate, to his very first basketball game in Allen Fieldhouse complete with a pre-game stop at The Wheel.  Another very special moment was singing a duet in church with granddaughter Avery.  Although he didn’t much like hearing that she was the lead and he was her backup.

While recovering from his first round of chemo in March 2021 at Nottingham Health and Rehab in Olathe, KS, his Sigma Chi brothers serenaded him.  The weather was perfect and Phil was able to sit by a large open window and even sing along until becoming verklempt.

Phil’s hometown community rallied around him during his battle with lung cancer.  Phil said, “I’ve had more people at my house in the last 30 days than I had in the previous 30 years!” (Phil was more of a professional guest than host). The town he loved really came through for him in a big way during these difficult 11 weeks since the diagnosis.  He was miraculously able to stay at home with his dog, Roxy, for the last several weeks of his battle because of the selfless community support.  On May 2nd, 2021, an impromptu, surprise, friendship parade was organized in a couple of hours and approximately 100 people passed by his bedroom window with messages of love and support.  He greeted each person by name and was deeply touched by their presence.

Beyond his witty and larger-than-life personality, Phil was a good man, a good father and grandfather (Pop to his grandchildren), a good community man, staunch member of the First United Methodist Church, a talented tenor, and well-known local real estate broker/appraiser.

Although they were divorced, he and Susy worked to maintain good relations which made it possible for many combined family celebrations over the years. Most recently, the family had several “Fridays with Pop” for favorite family meals of the past and good conversations.

He will be dearly missed by his family and friends, who when reunited with him on the other side, MAYBE by then, all of his old, tired jokes will finally seem new again.  No question, he will greet them asking, “Did we go to high school together?” OR “Are you here for the cheerleaders’ convention?”

Phil leaves behind his devoted children, Joshua John Hammons (Pittsburg) and Carey Carson Hammons Parks (Overland Park), grandchildren, Avery Jane Parks and Nate Carson Parks, and last but not least, the famous Roxy the Doxy (as Phil called her), his devoted dog.  She was a particular comfort in his last days (when she wasn’t standing on his chest!).  Fortunately for Phil, his children were committed to him in spite of the fact that he said to a home health nurse, “Help, my kids are trying to kill me!” during her very first home health visit.  If you knew Phil, this surprises no one (other than that unsuspecting home health nurse).

Greeting Phil on the other side are his father, Paul Leroy Hammons; mother, Emily Carol Carson Hammons; brother, Stephen Carson Hammons, and countless other treasured family members and friends both human and canine.  The Hammons family LOVES dogs and in particular, Phil looked forward to reuniting at the Rainbow Bridge with his loving companion of 15 years (who he stole from his neighbors…that’s a story for another time) Maggie the dachshund.

In lieu of flowers, please make a donation in Phil’s memory to the organizations that brought the Hammons family its most pedigreed members:

A celebration of life service will be held at 11:00 a.m. on Friday, May 21, 2021, at The First United Methodist Church in Fort Scott under the direction of the Konantz-Cheney Funeral Home. Due to COVID restrictions, the attendance is limited to 100 attendees maximum. The family is investigating options to stream the service online. Buck Run Community Center will be set up with chairs and a large screen for church overflow to watch the service. When available, details to join the live stream of the service will be shared on Phil’s CaringBridge site at https://www.caringbridge.org/visit/philhammons, on Facebook, and also available from Konantz-Cheney Funeral Home, 15 W. Wall St., Fort Scott, KS, 66701.

Immediately following the church service, a procession to Evergreen Cemetery will be held. The family encourages all to join in the procession to the cemetery and at the graveside. The family requests that you please submit stories and memories to the online guestbook at www.konantz-cheney.com.