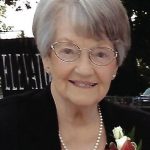 Memorial services will be held at a later date.

Phyllis attended the Mercy School of Nursing and later worked for at the Newman-Young Clinic from 1959 to 1997.  She was a member of the Church of Christ.

She is survived by a daughter, Jonni Stanton, and husband, Steve; two sons, Mike Norris, and wife, Kathy, and Phillip Norris and wife, Debbie, all of Fort Scott; a sister-in-law, Joycelyn Malone, and husband, Keith; grandchildren, Jerod Stanton, Lindsey Gulager, Linda Cabuay, Lisa Davis, Megan Vincent, and Andy Norris, and 12 great-grandchildren.  In addition to her husband, Claude, she was preceded in death by her parents.

Phyllis was cremated per her wishes.  Memorial services will be held at a later date under the direction of the Konantz-Cheney Funeral Home.  Memorials may be made in Phyllis’s name to The Beacon, Inc. Contributions may be sent to, or left in the care of, the Konantz-Cheney Funeral Home at P.O. Box 309, 15 W. Wall Street, Fort Scott, Kansas   66701 The family encourages friends to sign Phyllis’s memorial book at the funeral home. Condolences may be submitted to the online guestbook at konantz-cheney.com.