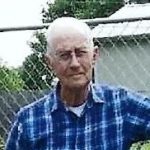 Dale Geiger, 87, of Fort Scott, passed away early Tuesday morning, October 13, 2020, at Girard Medical Center. He was born June 24, 1933, in Uniontown, Kansas, the son of Schley and Ruth Marie (Wells) Geiger.  He married Bonnie Bolinger on November 6, 1952, at the Petersburg Presbyterian Church, and she survives of the home.

Dale was an insurance underwriter for The Western Insurance Co. for many years and also farmed. He served in the US Army during the Korean War from November of 1953 until December of 1955 as a heavy artillery instructor in the 3rd Army Infantry under Dwight Eisenhower.

In addition to his wife Bonnie, Dale is also survived by his daughter Joyce Jennings of Mound City, Kansas, his son Steve Geiger of Uniontown, Kansas, three grandchildren, and four great-grandchildren. He was preceded in death by his parents, and a brother, Dewayne Geiger.

Rev. Carl K. Ellis will conduct graveside services at 1:00 p.m. Friday, October 16, 2020, at the Uniontown Cemetery under the direction of the Konantz-Cheney Funeral Home. Memorial contributions may be made to either 4H, Meals-On-Wheels, or the Beacon, and may be left in the care of the Konantz-Cheney Funeral Home, 15 W. Wall St., P.O. Box 309, Fort Scott, KS 66701. Condolences may be submitted to the online guestbook at konantz-cheney.com.