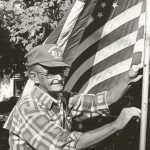 Ralph graduated from Fort Scott High School, Class of 1942.  He was a lifelong farmer and rancher at the family farm west of Fort Scott.

Ralph was a faithful member of First Assembly of God, serving many years as a board member.  He was a man devoted to God and prayer.  He was a 50+ year member of the Olson-Frary-Burkhart Post 1165 Veterans of Foreign Wars.

Rev. Don Payne, who served as Ralph’s Pastor for over 14 years, and Rev. John Gifford, his nephew, will conduct funeral services at 11:00 am Friday, July 1, 2022, at the Konantz-Cheney Funeral Home, 15 W. Wall Street, Fort Scott, Kansas.  Burial will follow at the US National Cemetery with Military Honors presented by the US Navy Funeral Honor Detail out of Kansas City, Missouri. Condolences may be submitted to the online guestbook at konantz-cheney.com.